Sharing their stories of tragedy and comfort, three families describe losing spouse and parent before age 40

Shortly after they were married, Katie Miller suggested that she and her husband Stephen get life insurance. They were planning on having a family, but Stephen didn’t see the point. They were both in their 20s and had no serious health concerns. Life insurance wasn’t on his list of priorities. Katie thought of life insurance differently and convinced her husband to go with her to an appointment with an insurance professional. Katie and Stephen were able to take advantage of their young ages to purchase life coverage for both of them.

Michael and Traci Kovacic had two young children, a dog and were living paycheck-to-paycheck. Mike was a loving husband and enjoyed outdoor sports and running. Even though their finances were tight and they were both physically fit, Mike’s father convinced him to buy life insurance policies that would provide income for his family if something happened to him.

Jenny Chich was a single 20-year-old who took out a permanent life insurance policy thinking that the cash value portion could help her save for retirement. Jenny met her future husband Jim on a blind date and they soon married and began to have a family. Three children later, Jenny had held on to her life insurance policy even when times were financially difficult for her and Jim.

There are common threads between these three stories. First, each couple decided to make a plan to control the shape of their family’s financial future through the simple act of buying life insurance coverage. Through the help of an insurance professional, each couple contemplated and made an insurance plan for the unthinkable: living in a future after one of them had died.

The second common thread is the most tragic in that each family experienced the devastating loss of a parent. Katie Miller, Mike Kovacic and Jenny Chich were in the middle of living everyday lives with their families when they died suddenly: Katie passed from aggressive cancer, Mike died of a sudden heart attack, Jenny passed away due to complications during childbirth. All of them passed before they were 40 years old. No one expected their lives to be cut short.

The final thread is that for each family, life insurance became the life preserver that kept them afloat in a stormy sea of emotional, relational and financial issues caused by the death of their loved one. Stephen, Traci or Jim never thought they would have to say goodbye to a spouse so soon, or to parent their children alone.

“Life insurance had allowed me to move forward in life,” said Traci Kovacic. “It bought me some time to figure out my life without Mike. I don’t know what I would have done without it.”

…each family experienced the devastating loss of a parent….All of them passed before they were 40 years old. No one expected their lives to be cut short. 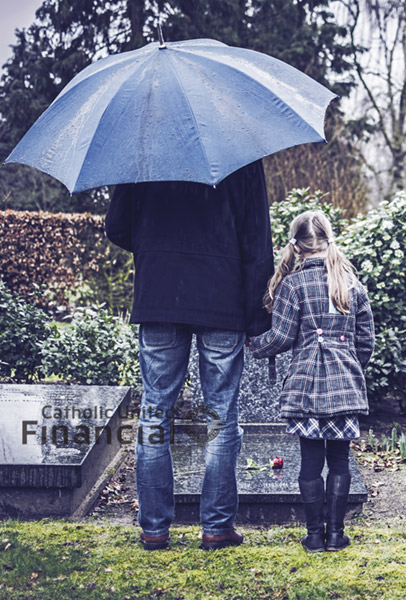 Life insurance became the life preserver that kept them afloat in a stormy sea of emotional, relational and financial issues caused by the death of their loved one. Life insurance helped Stephen Miller and his two boys stay in their home, which Stephen couldn’t afford to pay for on his salary alone. “Nothing can bring Katie back, but having life insurance meant we didn’t lose everything…Life insurance eased my financial worries on so many levels.”

For Jim Chich, taking care of his newborn child and three other children all under the age of six was suddenly his responsibility alone. The benefit from Jenny’s life insurance policy allowed him to take a year off of work so he could be a full-time father to their kids.

Each couple didn’t let their young ages serve as an excuse to put off buying life insurance. In fact, obtaining life policies as a young adult can work in a person’s favor. Life insurance is a product based on calculations using age and health factors. Smoking, family health histories and lifestyles fit positively and negatively into those calculations. Youth is a huge advantage when a person purchases life insurance because most of us are healthier when we’re young.

Keep in mind that life insurance is a product that we typically own for decades. The financial impact of waiting to purchase life insurance can increase the cost. If a 30-year-old male waits 10 years to purchase a term life policy, he might pay up to 40 percent more in premium at age 40 for the same policy he could have purchased now.

Stephen, Traci and Jim shared their stories because they experienced tragedy firsthand. They had the benefit of life insurance to see them through tough times. All three couples were tempted to let the opportunity of getting life coverage pass by, but they stuck with their coverage never knowing how important it would become. The Millers, Kovacics and Chichs don’t want other families to experience similar circumstances without the financial comfort that life insurance provided for them.

To determine how life insurance can help you control an unknown future, contact your local Sales Representative for a quote. You can find yours through a convenient zip code search by clicking here.

The true testimonials in this story were provided by Life Happens, a nonprofit educational organization that promotes the ownership of insurance products that help Americans take financial responsibility. Life Happens is the sponsor of Life Insurance Awareness Month held every September. Find out more at www.lifehappens.org. Thanks Harald! Memories of the Borrmann era